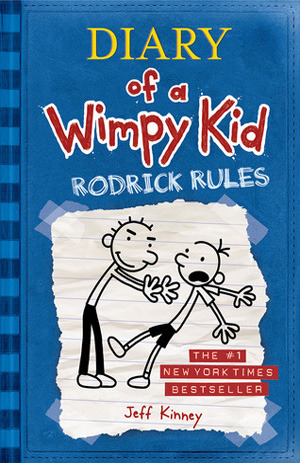 Secrets have a way of getting out, especially when a diary is involved,
Whatever you do, don’t ask Greg Heffley how he spent his summer vacation, because he definitely doesn’t want to talk about it.
As Greg enters the new school year, he’s eager to put the past three months behind him . . . and one event in particular.
Unfortunately for Greg, his older brother, Rodrick, knows all about the incident Greg wants to keep under wraps.  But secrets have a way of getting out . . . especially when a diary is involved.
– Goodreads
Ever since I got out Diary of a Wimpy Kid out of the library around six months ago, I have been quite obsessed with the series. I have read almost every single one and watched all the movies.
I read Diary of a Wimpy Kid: Rodrick Rules in around two hours on the 15th of April. I just wanted something a little lighthearted while I was reading Twilight, so I picked it up and read it.
I thought they were all funny characters, especially Rowley. I don’t really like Greg’s selfishness, but it suits his character and a lot of funny scenes happen because of his selfishness.
It was a very good book and very funny, and I like how they did a movie for the book, and that was funny too.
I give it 4 out of 5 stars.
Well, see ya!

Hello! My name is Chelsea, although everywhere online I am Milelongbooklist. I love books, as you may know, and I also love writing too. View all posts by Milelongbooklist